This is a document inspired by the official description of the Witchlight Marauder given in the DnD variant "Spelljammer". This version differs from the official in several ways, and is thus not described so much as a rendition of the original, but rather as my own take on the entities in question. Some baseline knowledge of Spelljammer is necessary for understanding this document, but it is mostly distant from anything directly relating to their original lore. Please note that this article is directly converted from a twitter thread and has not yet been edited, thus, it may have some awkward phrasing or irregularities for now.

Spelljammer is a sort of "DnD in Space" rules system. It a world wherein people travel throughout a cosmos of various planets and other small astronomical bodies within giant seemingly impenetrable crystal spheres, which can be phased through with certain types of magic or exited through mysterious portals that occasionally appear in their boundaries. Outside the spheres is a flowing and rainbow colored substance known as Phlogiston containing currents like that of a sea. The scale is mostly smaller than that of real space, I believe.

A Witchlight Marauder is a horrible doomsday weapon invented in an ancient war for "scorched earth" tactics - the depopulation and destruction of a biosphere. The primary stage consists of a space-borne entity that emits the land variants onto targeted areas. The space marauder will be covered at a later time, as this report will deal mostly with the terrestrial variants of the species complex. 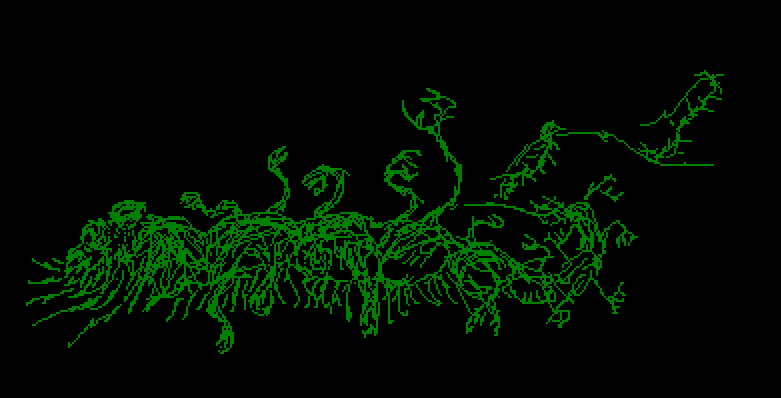 The primary land marauder is a massive entity that can appear from the distance almost like an endless train. Witchlight Marauders are not natural or simple biologically engineered beings, but alchemical combinations of a variety of sciences. The Primary walks across the land consuming everything in its path and processing it into a variety of toxic and corrosive gasses. Marauders are designed to be able to eat almost anything - rock, steel, flesh, water - everything a Marauder consumes is processed through its stomach, a massive acidic blast furnace that magically converts even the hardest materials. In addition to their primary maw, the Marauder's sides are covered in rows of snapping iron jaws that can extend on pseudopodia to grab anything missed by the head. These maws additional belch the cloud of toxic gas that renders the area around it hostile to life.

The Marauder's general procedure is to forage for several weeks until it reaches a specific length, whereupon it burrows deep into the ground and rests for several nights until it is capable of performing mitotic reproduction, splitting into two. Primaries do not particularly pay a lot of attention to the actions of those around them at first. Their main decision making process involves prioritizing marching through areas populated by large amounts of life forms while producing secondaries. 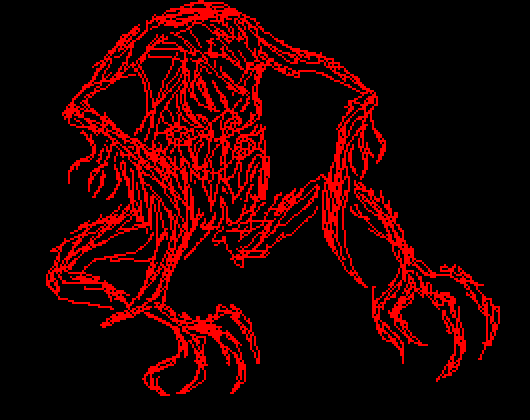 Secondary marauders are large and vaguely humanoid entities with a very tough and boiled skin, legs covered in extremely strong grasping toes, and hands consisting of massive claws. Headless, they instead have an inconsistently shaped set of eyes above a massive maw on their gut. Because the primary marauder pays little attention to specifics, the secondary marauders were manufactured to deal with stragglers. For this purpose, they possess a variety of traits very unlike that of their parent unit. Primary Marauders are extremely intelligent, but their mind is very much unlike any sort of biological creature - being totally that of an alchemical being, it is difficult to impossible to telepathically interact with one, and it's often hard to understand their thought process. Secondary Marauders, however, are each about as intelligent as a relatively smart human. Secondary Marauders are mostly meant to act on their own, but retain some amount of communication with each other as they separate and wander the country away from their parent.

Secondaries are, among other things, excellent at dealing with situations the Primary doesn't have time to divert effort to - in particular, climbing. The toes and claws allow Secondaries to be much more effective at climbing treacherous mountains and walls. Each Secondary is in turn waited on by an assortment of Tertiary Marauders. It's usually born with a set of them already ready to go, and as it continues to feed on anything it can find, produces more and more of them to assist its activities. 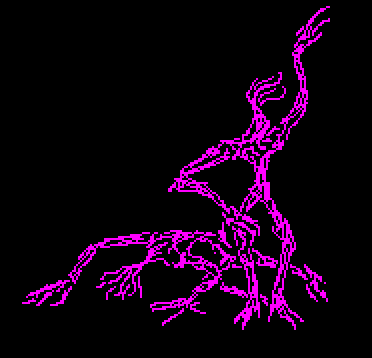 Small compared to the Secondaries, Tertiaries are only about 4-5 feet tall. Although they lack a head, their neck instead terminates in a web of sensory tentacles that allow them to interpret a variety of inputs. This includes the ability to see, which is not well understoood. A secondary essentially operates as a "cell" of entities, wandering through the wilderness at an unusually high speed with a variety of tertiaries bonded to it. At regular intervals, it stops to rest, releasing its tertiaries to explore the area around it for food. Both tertiaries and secondaries are capable of communication through a high pitched chirping language. In general, a secondary's movements are surrounded by a squad of tertiaries constantly updating each other on position and asking the secondary for directions.

Tertiaries actually almost completely lack a digestive system, being almost utterly dependent on feeding through their tentacles off of their secondary parent. In combination with their constant communication, they could be almost thought of as extensions of the secondary's body. The personality of a tertiary is something like if a cat had the intelligence of an 8 year old child. They are intensely curious and greatly excited by any signs of prey, fascinated by mechanical devices and hiding places, and constantly on the look for anything to play with. Ultimately, the purpose of tertiaries is to catch prey and feed it to the secondary, then to return to it and latch onto its body to continue their constant peregrination. Tertiaries have almost no self-preservation instinct and will flip into a berserk rage when harmed.

Secondaries also have a relative lack of self-preservation, but have a much more military minded point of view. Each is meant to act as a horrendous field commander, keeping track of their allies and moving to efficiently destroy ecosystems and civilizations. Secondaries are in turn able to keep contact with their parents through an internal communication system, akin to radio. However, Primaries speak to their children extremely rarely, mostly listening to reports in silence while they continue with their own movements.

What Primaries do with their own radio communications is speak to each other. As mentioned, Primaries have minds very much unlike that of any creature - best comparable to that of a war computer. While Secondaries handle tactical considerations together, Primaries handle strategic ones. Although their innate urge is to seek out sources of metal and highly populated areas, a Primary's intelligence kicks in to decide when a target is of military importance. It is almost impossible to kill a foraging Primary due to a variety of defensive measures, including their immunity to the vast majority of spell types, large body that can regenerate from small pieces, unusual biochemistry and neurochemistry, and so forth. Thus, if one does die, this is usually seen as a source of immense alarm by any other Primaries that are listening and they will usually seek to converge on the location wherein their sibling died in an attempt to overwhelm whatever was able to destroy one.

The end goal of a Primary Marauder, as with all doomsday weapons, is to end the world. When Marauders have exhausted a biosphere and destroyed everything they can locate, they will proceed to attack each other in desperation. At the end of the day, a planet targeted by a Marauder seed would be left covered in acidic toxins rendering recovery almost impossible, and the rotting corpses of giant metal behemoths with nothing more to do except attempt diving deep into the earth in search of more metal. In general, the only time wherein a Marauder is truly vulnerable is when a Primary descends into a nest after a foraging period to prepare for reproduction. During this time, their brain is essentially dormant and their actions are limited. Unfortunately, even in this scenario dealing with one is not an easy task - before submerging, it will almost always produce a massive regiment of Secondaries to guard its lair, and the inside will be filled with the same noxious gasses that always accompany its presence.

Thankfully, no Marauders have ever been used in war time. The originals were destroyed after a single preliminary test was completed, and it is believed that all knowledge of how to produce such a thing was destroyed when they were rendered extinct. And yet, legends still remain of a single space marauder that broke free of its restraints and escaped the blockade long ago, flying alone into the Phlogiston to wander the streams forever... and still more speak of Marauders left in stasis fields as a form of "Dead Hand", meant to rise and bring disaster to all existence should their side crumble.

In the end, all these stories are routinely dismissed as myths. There is, after all, no solid evidence of a populated planet ever falling to a Marauder invasion. But the creatures did once exist, and it is not unreasonable to imagine they may yet exist once again... 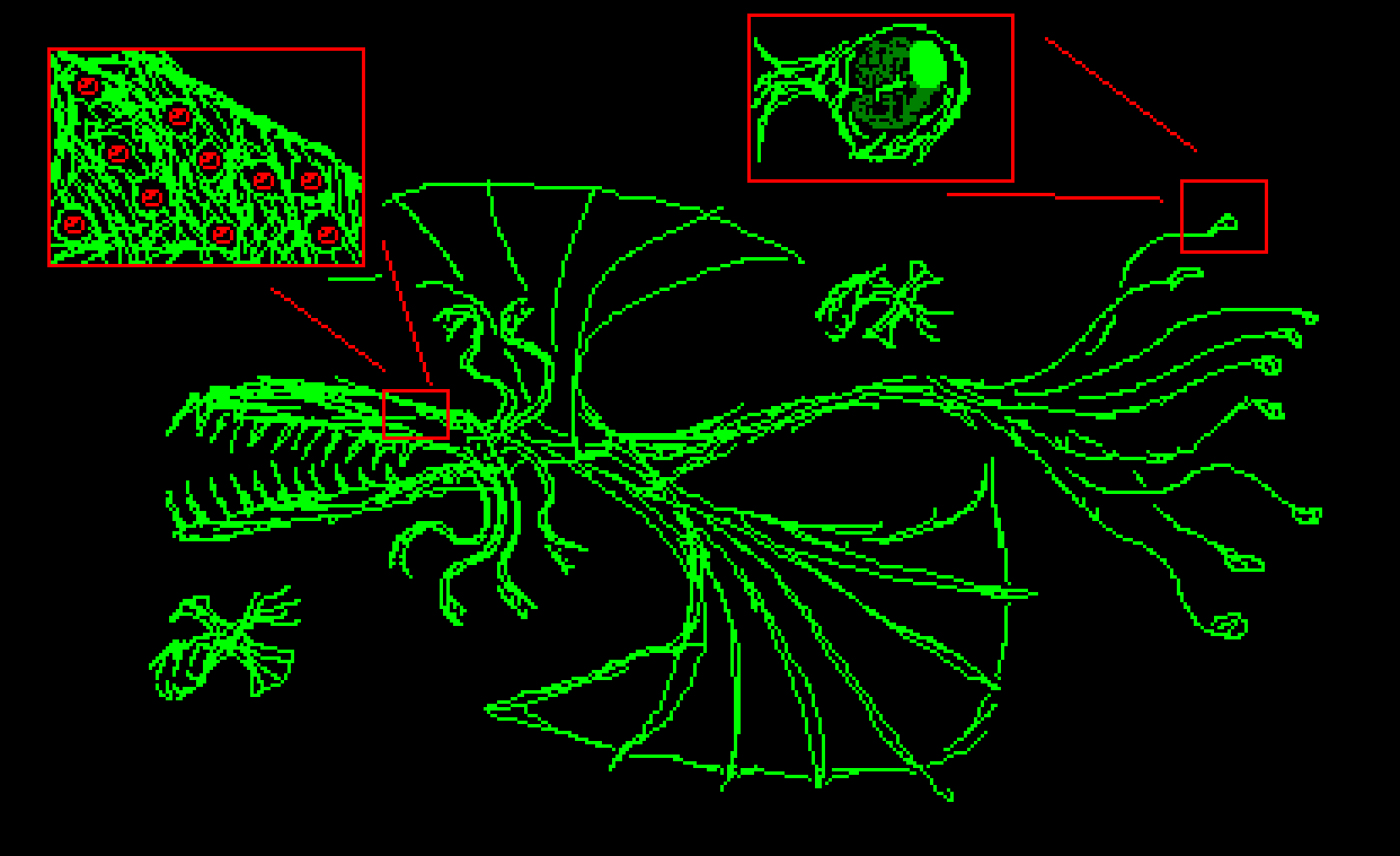 Special Appendix 2: Vague diagram of the "Space Marauder", the parent of Primary marauders, which are grown on the ends of its tail and ejected as armored meteorites. Also pictured are two "Remote Feeders" that assist it in gathering nutrition, also grown on the tails.