Mono-White in Magic: The Gathering

In recent years, much frustration has been expressed by the Magic the Gathering community regarding the problems faced by the color White. Although this has been visible in many forms and regarding many formats, perhaps no fanbase is quite as incensed by this feeling as those who love the format of Commander, an originally casual format that was embraced by Wizards of the Coast about a decade ago and is now seen as a shining jewel in the crown of Magic formats. Yet while it is well established and understood by many that White is the weakest color in Commander right now, I find that the discourse often trips over itself and becomes confused regarding what people take issue with, want to see, and overall think about White as a color. In this article, I'd like to try to analyze the situation as a whole, identify problem areas, and give my ideas for things that should be worked towards. In general, however, the main purpose of this article is actually to respond to suggestions others have given, as I believe that this is where the most questionable things on this topic have been said.

The Basics of the Color Pie

To begin this article, I'd like to go back to the very basics of the color pie as a concept. This will no doubt be staggeringly dull to anyone with more than a passing familiarity with the game, but I feel it is nevertheless useful to understand where my arguments are coming from as you read. It would also be somewhat pleasing to me if this article were at least vaguely intelligible to people with very little experience with the conceptual side of the game, so I feel it's helpful to start from the very beginning.

Magic: The Gathering is a collectible card game. The game essentially consists of a sort of caricatured battle, wherein two players seek to combine cards to build up "advantages" that they eventually use to win, usually by either "attacking" their opponent by using Creature cards or using some other means of dealing damage. To facilitate this, the game has a very complex system that handles what cards can be played when, how cards interact with each other, how exactly cards can attack and damage players, and so forth. What sets Magic apart from its very close relative, Yu-Gi-Oh!, is that Magic is built heavily around a resource system known as mana. Conceptualized as the magical force that the players are drawing upon to power their cards, essentially every card in MtG interacts with mana in some way. For many cards, the only link they actually have to mana is that the card has a cost: An amount of mana that must be paid to either first "cast" the card out of the hand or to activate an ability of that card in some zone. It is this mana that fundamentally informs the entire structure of the game - a card that costs seven mana can do far more than a card that costs one mana, and so games get to have a sort of development to them where players start out doing very weak and simple actions and escalate towards sprawling combinations and massive haymakers. 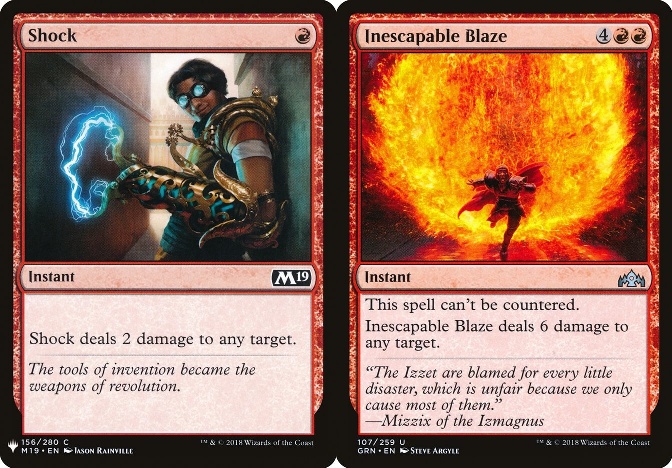 Shock, which costs a single Red mana, is given a much smaller effect than Inescapable Blaze, which costs 6 mana total.

Magic's general game progression is thus determined by access to mana, and much of the game revolves around how much mana you can produce in a single turn. The main method for producing mana at first in Magic are Lands, cards that represent some location from which the spellcaster the player is roleplaying as is drawing this magical force from. Lands may be played for free at a rate of one per turn, and this is what actually sets the pace of the game - players alternate drawing cards, playing lands, "tapping" them for mana, using that mana to do things like play non-land cards, and then ending their turn so the next player can compete. While there is nearly infinite depth to the intricacies of these systems, what I'd like to discuss today is a specific component of Mana - color. To divide abilities up and impose a sort of additional "deckbuilding cost", a massive proportion of MtG's cards require the player to pay for them using a specific "color" of mana. From this, a sort of factional division of powers is created. Green decks fixate on their creatures and lands and have abilities to get them out faster than other decks. Red decks deal damage directly and focus on winning the short game. Blue decks draw cards and counter spells, lacking in ways to permanently deal with problems. And so forth. The division of card effects between the colors of mana is known as the "color pie", and is one of the root concepts that makes the game stand out. In fact, the colors are directly represented on the back of each Magic the Gathering card. 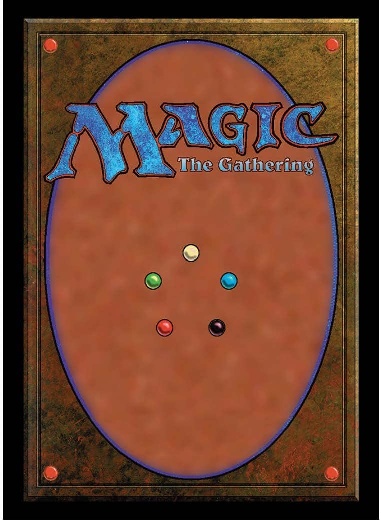 The center of the MtG card back features a symbolic representation of the five colors cards are divided between - White, Blue, Black, Red, and Green.

So the division of abilities across the five colors is an integral component of the game's structure. In general, colors are supposed to be balanced by this - a player is meant to feel that any color can be at least somewhat competitive against any other color, unlike games balanced by a Rock-Paper-Scissors system wherein each faction is weak versus and strong versus different factions. Though specific traits of colors may offer a unique advantage versus others, each color is at least meant to have some degree of game versus every other color. It's worth noting, incidentally, that a deck can be any combination of colors as well. Although going into more colors decreases your consistency, because you might draw lands that produce one color's mana when you really need another's, it obviously increases the range of abilities your deck is allowed to have. Ignoring this, however, I'd like to return to the discussion of mono-colored decks.

Because each color is meant to have its own "slice" of the color pie, it's generally considered important for a color to have some field it excels in. No color should be able to do everything at once, but every color should be able to have something it can point at and say "I do that better than everyone else." On the flip-side, each color is generally expected to have a weakness - a thing it fundamentally cannot do, or at least requires help from other colors or inefficient colorless cards to pull of. These specific weaknesses and strengths are the basis of a commonly used set of terms when describing abilities on individual cards - color pie bends, and color pie breaks. According to Magic Spokesman Mark Rosewater, who views the color pie as the most important component of Magic, a color pie BEND is a card which does something a color isn't really supposed to do, but isn't hugely supposed not to do. A BREAK, on the other hand, is a card that specifically undermines a color's designated weakness. Color pie breaks are bad for the game because they allow a color the ability to cover the main things it's expected to need help doing, which encourages staying mono-colored for consistency reasons. A mono-Red deck, for instance, will have a severely difficult time dealing with Enchantments, and may wish to dip into a color such as White so it has at least the option of removing them if it really needs to. But if a card were printed that allowed Red to remove Enchantments at about the same rate it can do everything else, then there'd be no reason for Red to want to "splash" (incorporate as a small amount without hugely focusing the deck on) White, and it would most likely want to stay single colored. 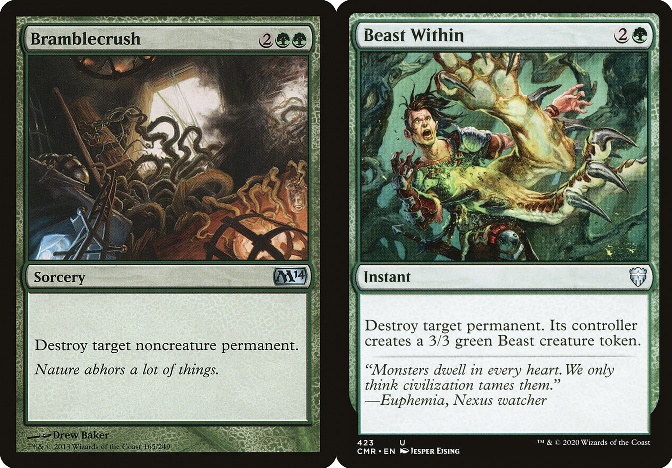 Green is able to destroy every non-creature permanent type, but is meant to have difficulty destroying other creatures except by using its own to fight them. Yet it has occasionally gotten cards like Beast Within that allow it to remove any creature it wishes, so long as it's willing to create a 3/3 token - directly overcoming what is supposed to be the color's main weakness.

In recent years, Wizards has made troubling attempts to make Green - a color that was traditionally somewhat mediocre in many formats and had relatively linear gameplay - stronger at overcoming many of its old weaknesses. In doing so, they have printed many extremely powerful value engines and improved it in almost every field, creating a trail of bannably good cards. I have not seen essentially anyone say Green is weak in modern formats over the last few years, and in general it is well understood that the color has been so aggressively overhauled that basically everyone would appreciate it if Wizards slowed down. On the opposite side, however, lies White - a traditionally middle of the road color that has seen very few major power developments and is squarely mediocre in the Standard format. What I'd like to discuss today is the question of White in Commander, an extremely popular multiplayer-focused format with a storied history that is apparently THE most popular way to play the game these days.

The Nature of Commander